Obsessive-compulsive disorder may be the most popular disorder to say you have, without actually having. In common parlance, "OCD" is used to refer to someone who likes things a particular way, or who seems overly concerned with cleanliness.

In the world of mental health, obsessive-compulsive disorder refers to something more serious. OCD can be scary or frustrating, and by definition, it is time-consuming or impairing.

OCD includes two major types of symptoms: obsessions and compulsions. A person diagnosed with OCD can experience both sets of symptoms, or only one of the two.

Obsessions are thoughts, urges, or images that just won't leave a person alone. They're perceived as being intrusive and unwanted, and they often lead to feelings of anxiety, shame, and doubt. Some common obsessions include:

Compulsions are repetitive behaviors that a person performs according to a rigid set of rules, or in response to an obsession. Compulsions are intended to reduce anxiety, although they have no realistic connection to the anxiety-producing situation, or they are excessive. Some common compulsions include:

To meet the criteria for OCD, the individual must have obsessions or compulsions, or both.

1. Recurrent and persistent thoughts, urges, or impulses, that are experienced at some time during the disturbance as intrusive and unwanted, and often cause anxiety.

2. The individual attempts to ignore or suppress these thoughts, urges, or images, or to neutralize them with another thought or action.

1. Repetitive behaviors or mental acts that an individual feels driven to perform in response to their obsessions or in accordance with a rigid set of rules. These can include hand-washing, checking (such as repeatedly checking that a door is locked), counting, or repeating words silently.

2. The behaviors are intended to reduce anxiety, distress, or some dreaded event. However, the compulsive behaviors are not realistically connected to what the are trying to prevent, or they are excessive.

A diagnosis of obsessive-compulsive disorder also requires that the obsessions and compulsions are time-consuming (for example, they require over 1 hour every day), distressing for the individual, or they cause impairment in an important area of functioning.

Finally, the symptoms of OCD cannot be better explained by another cause, such as a drug or medical condition (including other mental disorders).

Adapted from the DSM-5 by the American Psychiatric Association

How Does OCD Work?

So, how does OCD actually work? First, to understand OCD, you need to know a little bit about anxiety. Your body uses anxiety as an alarm system to warn you about possible dangers. At a low level of perceived danger, your body might experience stress. At a high level of perceived danger, your body will experience fear. Normally, anxiety helps to keep us alive. It stops us from driving far too fast, and it keeps us alert when we walk down a dark street alone.

With OCD, the anxiety alarm system is triggered far too easily, and its warnings are much more intense than necessary. Minor dangers—or dangers that don't even exist—might trigger a strong anxiety response.

The brain takes note of the serious response to touching a doorknob, and confirms to itself that touching doorknobs must be dangerous. Furthermore, the brain notices that the anxiety did in fact diminish after 10 minutes of hand washing, so it must have helped. This creates a negative feedback loop where small sources of anxiety result in extreme responses, which then further reinforce the obsessions and compulsions. 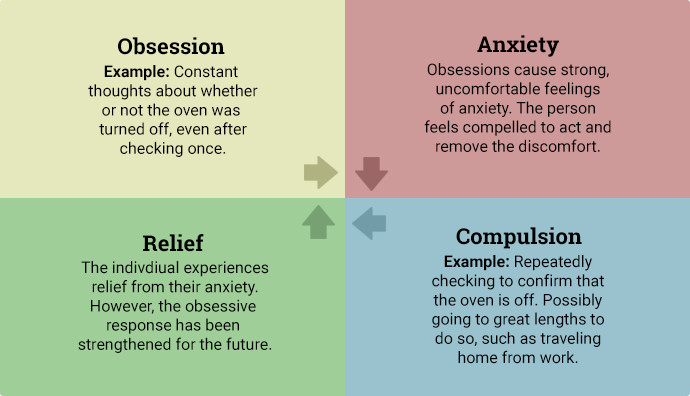 During the treatment of OCD, this cycle will be identified and broken. One form of treatment that focuses on the disruption of this cycle is called exposure and response prevention therapy.

Exposure and response prevention therapy (ERP) is a form of psychotherapy that's well supported, and commonly used, for the treatment of OCD. It falls under the broader category of cognitive behavioral therapy, and you may notice several similarities to the treatment of anxiety disorders.

Some forms of psychotherapy, such as those based around insight and finding the root cause of problems, may do more harm than good when it comes to OCD. They simply place more focus upon obsessions and compulsions, without providing any tools to manage them.

In the course of ERP, the client will be exposed to the sources of their anxiety, obsessions, and compulsions. As the client is exposed to their triggers, they will practice refraining from their compulsive behaviors. This will break the cycle of avoidance and the reinforcement of anxiety.

Before moving into the exposure portion of treatment, clients should have an understanding of how OCD works, what their obsessions and compulsions are (and how they are harmful), and how exposure will help them. Exposure therapies are, by definition, uncomfortable for clients. Few will consider facing their fears unless they believe in the treatment.

Proper psychoeduation includes a discussion about the length of treatment. Don't expect a significant change in obsessions and compulsions after only one week. Explain that, at first, your client will simply be resisting their compulsions. It won't feel great. After a week or more of practice, their anxiety will slowly begin to diminish. And then, in time, their obsessions and compulsions will also begin to fade (which will further reduce the anxiety).

Before beginning exposure, you'll need to identify specific obsessions, compulsions, and sources of anxiety that you would like to target. This will require some exploration and analysis. Give special attention to situations that your client tends to avoid due to their anxiety.

This portion of treatment can also include discussion regarding the meaning of compulsions and rituals to your client. It can be valuable to begin labeling obsessions and compulsions as such.

After exploring your client's sources of anxiety, collaborate to record them on an OCD Exposure Hierarchy form. Each trigger should be ranked and listed from the most to least distressing.

The exposure hierarchy lays out a roadmap for the rest of treatment. Clients will face their triggers beginning with the least distressing items, and moving to more difficult levels as they improve. For this reason, be sure to list a variety of triggers, including some that that only cause a low level of distress, with a steady progression toward greater levels of distress.

During the exposure stage of treatment, your client will face a distressing situation (beginning at the bottom of the exposure hierarchy) and consciously refrain from their compulsion for at least two hours. This task should be practiced daily. Exposure can begin in session, but it should also continue throughout the week as homework. The standard hour-a-week sessions simply don't leave enough time for adequate exposure.

Based upon the example exposure hierarchy from above, the client will first be asked to touch a doorknob in a public place, and then refrain from their compulsion (e.g. washing their hands) for two hours. During this time they will most likely experience anxiety and the desire to act on their compulsion, but they will consciously refrain.

If your client can't contain their compulsions after grabbing a doorknob, ask them to touch it with only one finger. Be creative to come up with forms of exposure that are challenging, but not impossible.

As a normal, empathy-feeling human, you may be tempted to reassure your client that "everything will be OK" during exposure. While it's fine to explain at the beginning of treatment that your client will never be placed in danger during their sessions, reassurance during exposure acts as a form of avoidance. Remember, your client is supposed to be experiencing anxiety, and reassuring them contradicts that goal.

Tip: In extreme cases where even the smallest trigger is too much for your client, collaborate to create a narrative about exposure to the trigger. In this narrative, your client's fears should be realized. Remember, the goal is to incite anxiety, not to tell a fun story where everything goes great! Ask your client to vividly imagine the narrative.

One important note: Imagination is not a replacement for real life exposure. It's just one step toward the next stage of the hierarchy.

After your client has become more comfortable with the lowest level of the hierarchy, move to the next trigger on the list. The anxiety associated with each level doesn't have to totally disappear before you move on, but the next task should feel manageable (although challenging).

As a basic model for the progression through this stage of treatment, try to introduce your client to a new level on the exposure hierarchy each week during their therapy session. If possible, begin practicing the exposure in session, and ask that your client also practices every day at home until they return for their next session. The importance of properly completing the homework cannot be emphasized enough. Ask your client to set a timer for two to three hours after exposure to their trigger to keep track of how long they must resist their compulsion. No cheating!

Of course, the time frame for treatment will differ case-by-case. Use your professional judgement to move your client through the hierarchy at a pace that's appropriate for them.

Tip: It is a common mistake to end treatment before a client has addressed their biggest fears. Treatment should address the full exposure hierarchy, and not stop early because it seems "close enough". Unaddressed triggers can grow, and the anxiety will spread back to areas that were previously under control.

Mental compulsions, such as self-reassurance, internal counting, special prayers, mentally reviewing situations, and others, can pose a special challenge during response prevention. Mental compulsions are often automatic and almost involuntary.

Oftentimes, therapists' natural response to this challenge is to teach clients to distract themselves. This may treat the symptoms in the moment, but not the underlying issue. Distraction works as a form of avoidance from the anxiety.

Instead, clients should be taught to "spoil" their mental compulsions by re-exposing themselves to the trigger with their thoughts.

For example, someone might experience a great deal of anxiety after having normal conversations. Afterwards, they mentally review the conversation again and again, looking for evidence that they acted normally. This mental process can be spoiled by replacing the reassuring thoughts with alternatives such as: "I might have made a fool of myself during that conversations."

Spoiling the reassuring thoughts forces the client to continue their exposure to the anxiety, which will eventually result in its diminishment.

We've collected several resources related to OCD to help you continue your education: